Stewart Thomson email: stewart@gracelandupdates.com email: stewart@gracelandjuniors.com email: admin@guswinger.com Nov 19, 2019 Top US politicians describe the US economy as the “mightiest of all time”. Please click here now . Houston, we have a problem! The next tariff tax deadline is now only about three weeks away. While Trump’s diehard fans may want him to hike these taxes again if China doesn’t “play ball”, massive FOREX liquidity flows suggest that the world’s biggest money managers are becoming extremely concerned about the level of risk in the US economy. Please click here now . Double-click to enlarge. American GDP growth has literally incinerated (from what I predicted would be a 5% peak as the tariff taxes were launched), and this dollar versus yen chart shows a massive bear wedge pattern in play. That bear wedge is ominous. It suggests giant bank FOREX traders believe something is about to go badly wrong with the US economy… more wrong than the horrific sub 1% GDP growth in play now! Trump’s initial platform of tax cuts, law and order, and deregulation was awesome. It created surging markets (both gold and stocks), a positive vibe for citizens, and solid GDP growth. That platform has been replaced with macabre QE and negative rates worship, turning a blind eye to a skyrocketing deficit, and a crazed attempt to boost growth with tariff taxes… and it’s all happening as the world de-dollarizes at an ever-faster rate. Stagflation is emerging, and some economists are forecasting that in 2020 corporate earnings and revenue growth will both come in at … Continue reading →

The Daily Sentiment Suggests a Major Market Top is Near   Bob Moriarty Archives Nov 19, 2019 As of November 18th, sentiment for The S&P futures and the Nasdaq Index is approaching nosebleed territory. The infusion of hundreds of billions of dollars on the Fed’s balance sheet since Mid-September has pumped the stock market higher …

Bob Moriarty Archives Sep 16, 2019 As any fan of detective books or shows knows well, when you observe a crime you must first ask yourself, “Who benefits.” The Latin is Cui Bono Literally to whom is it a benefit? On Saturday September 14th someone fired missiles or sent armed drones against Saudi oil facilities reducing world oil production by 5% and Saudi production by 50%. The beleaguered Houthis group at war by Saudi Arabia in Yemen quickly claimed credit for the attack. While the Houthis have used armed drones in attack mode previously against the Saudi’s, those flights were bee stings compared to the sophistication and breadth of success in the latest attack. The BBC calls the latest events “a different order of magnitude altogether.” There were seventeen different points of impact on the Abqaiq facility. What ragtag poorly armed enemy could possibly conduct such as remarkably complex attack? Since the recent long past sell-by date demise of John Bolton, Donald Trump’s current attack Chihuahua, Mike Pompeo, promptly insisted Iran was behind the attack. But how does Iran benefit by starting World War III? Are they so fucking stupid that they would wave a red flag in front of the nuclear armed US, nuclear armed Israel and Saudi Arabia run by a snow flake who thinks cold blooded murder is just about right when his feelings are hurt. Israel has been threatening Iran with destruction since at least 1982 with the publication of the Yinon Plan. The document is remarkable in its candor for the Zionist plan for the … Continue reading →

No one says it any better or more bluntly than Bob Moriarty of 321Gold.
This is a short piece but very relevant and worthy of your attention.
Who Says They Don’t Ring a Bell at the Top?
Enjoy,
Dudley

THERE WILL BE A REVOLUTION: Bob Moriarty’s Stunning Prediction of a Global Battle to Replace Fiat Money       by Lior Gantz | Mar 7, 2019 | Personal Finance Revolution is ugly and messy, but it’s sometimes necessary when tyranny exists. Tyranny can take many forms, including economic tyranny, which is manifested through the monetary supply in today’s world. Getting back to the gold standard would require nothing less than a revolution, and one widely-regarded commentator is predicting that we’ll see a revolt on a global scale. Wealth Research Group actually had the chance to speak with this daring individual, who happens to be none other than Mr. Bob Moriarty. He is the owner and publisher of the precious metal information and analysis portal 321Gold.com, as well as 321Energy.com, which covers the oil, gasoline, coal, natural gas, solar, wind, and nuclear energy markets. Known far and wide as a true patriot and world-class aviator, Bob Moriarty had ferried general aviation aircraft all over the world for 15 years, including more than 240 over-the-water deliveries. Mr. Moriarty holds 14 International Aviation records, including Charles Lindbergh’s record for time between New York and Paris in two different categories. Additionally, Robert Moriarty is a decorated United States Marine F-4B and O-1 pilot with over 832 missions in Vietnam. He became a pilot at the age of 20 and a Captain in the Marines at age 22, and Mr. Bob Moriarty remains one of the most highly-decorated pilots in U.S. history today. Courtesy of Bob Moriarty A truly multi-talented man, Robert Moriarty is … Continue reading →

Chris Vermeulen Posted Mar 3, 2019 The continued rally in Palladium has prompted speculation that Platinum, Gold, and Silver will follow this trend upwards with renewed buying pressure. The one thing that many people are not considering is that Palladium is an industrial use component for many manufacturing sectors – specifically the automotive …

Platinum vs. Palladium – What you need to know about the demand and price analysis Read More »

Bob Moriarty December 4, 2017 Silver and gold have hit a new low for the year during December in each of the last five years. They are on track for repeating their journey this year if we are to believe sentiment matters. And I do. Two measures allow us to gauge sentiment. My favorite is …

Time for a Correction in Gold Read More » 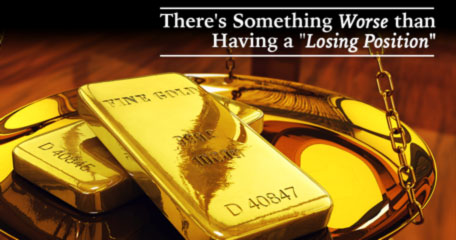 There’s Something Worse than Having a “Losing Position” Read More »

August 4, 2015 Dudley Pierce Baker http://CommonStockWarrants.com Bob Moriarty of 321Gold is a straight shooter, meaning he says what he thinks and doesn’t give a crap if you don’t like it. Sounds to me sorta like Donald Trump…… I’ve visited with Bob on numerous occasions and I’ve been on the same mine tour and he …