Heaven forfend — angels and ministers of grace defend us! — the chairman of the Federal Reserve has confessed the truth.

We write from our back today, floored, still unable to recover from the blow.

For yesterday the chairman ripped the central banker’s mask from his face, and let them have it straight in the eye… and right from the shoulder.

What mighty and stupendous truth did he uncage yesterday?

The stock market traded at record heights today. But the coronavirus struck again this afternoon. CNBC in summary:

Equities fell sharply to start off Thursday’s session after China said it confirmed 15,152 new cases and 254 additional deaths. That brings the country’s total death toll to 1,367 as the number of people infected jumped to nearly 60,000, according to the Chinese government.

But to return to today’s thumping question…

What sublime truth did Jerome Powell let out yesterday?

Here is the setting:

The Dirksen Senate Office Building 538, Washington, D.C. The Banking Committee of the United States Senate is in session.

Addressing the committee is the Hon. Jerome H. Powell, chairman of the Board of Governors of the Federal Reserve System.

He is a man heavy with duties to the American republic…

He is delivering the semiannual Monetary Policy Report to the Congress, in fulfillment of his obligations under the Humphrey-Hawkins Full Employment Act of 1978.

It is late morning. Committee members fight valiantly to maintain consciousness, but sleep has vanquished several.

Faint snores can be heard above Mr. Powell’s hypnotic droning.

One dreaming senator — we had best keep his identity dark — mutters something about “your sexy lips” and a name other than his wife’s.

A swift elbow from an adjacent senator nudges him awake.

Out it came, knocking us flat in the process:

“Low rates are not really a choice anymore; they are a fact of reality.”

Low rates are not really a choice anymore; they are a fact of reality.

No more talk of “normalization.” No more whim-wham about “the outlook.” No more “monitoring conditions.”

Instead, low interest rates are no longer a choice. They are a “fact of reality.”

Poor Alan Greenspan would be spinning in his grave today — if only he had a grave to spin in. Old Alan yet lives and breathes.

But does Powell not realize that a central banker’s job is to dodge, to weave, to talk… but not say?

We can only speculate that the fellow was overtaken by a temporary delirium, a transient psychosis.

Our belief that the Federal Reserve can never increase interest rates by any meaningful measure.

Higher Rates Would Collapse the Walls of Jericho

The entire financial and economic system would come thundering down.

And so it puts all existing records in the shade: 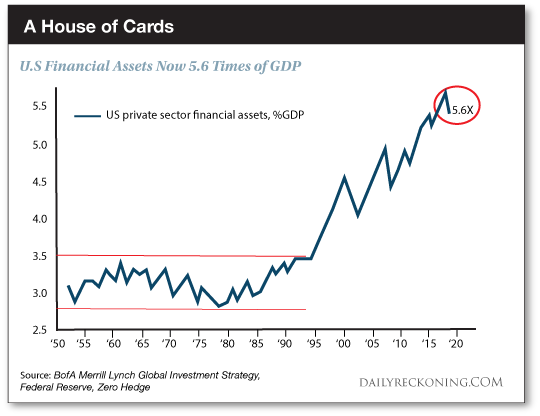 “Any sizable drop in the stock market would lead to an almost instantaneous depression.”

We fear they are correct.

The stock market and the decade-long economic “recovery” center upon ultra-low interest rates.

But returning to Chairman Powell…

“We Will Have Less Room to Cut”

Our unlikely Job was not done yesterday. He confessed another truth:

“We will have less room to cut.”

The federal funds rate presently squats between 1.5% and 1.75%. But as we have noted often, the central bank requires rates between 4% and 5% to push back recession.

Should recession invade the United States tomorrow, the Federal Reserve would enter the combat at half-strength… or less.

Thus it plans to send additional quantitative easing and “forward guidance” hurtling against the onrushing enemy.

“We will use those tools,” Mr. Powell pledged yesterday. “I believe we will use them aggressively.”

We have no doubt they will. But we are not convinced they will irritate or bother the enemy.

The Federal Reserve’s balance sheet already stretches to emergency wartime levels. And each expansion packs less wallop than the previous.

The Point of Diminishing Returns

The law of diminishing returns is a very powerful force in economics, and so we have to be concerned that it may also apply to quantitative easing.

What then of “forward guidance?” Is it formidable?

No, argues our own Jim Rickards. It is a mere popgun, firing a blank cartridge:

Forward guidance lacks credibility because the Fed’s forecast record is abysmal. I’ve counted at least 13 times when the Fed flip-flopped on policy because they couldn’t get the forecast right.

Thus the forked counterattack of quantitative easing and forward guidance may prove blunt in both prongs.

The Fed Looks to the Past

The chairman and his fellows may blow the dust off another anti-recession weapon — a weapon it has not employed in 69 years.

As part of their contingency planning for the next recession, Federal Reserve officials are looking at a stimulus scheme the U.S. last used during and after World War II.

But what could it be?

From 1942 until 1951, the Fed capped yields on Treasury securities — first on short-term bills and later on longer-term bonds — to help finance war spending and the recovery.

Placing caps on Treasury yields. That is the anti-recession weapon under consideration.

This scheme involves intricacies far too subtle and delicate for our dull understanding.

We therefore enlist the Journal to help penetrate the mystery:

Yield caps would be a cousin to QE. In QE, the Fed committed to purchasing fixed amounts of long-term securities. With yield caps, by contrast, the Fed would commit to purchase unlimited amounts at a particular maturity to peg rates at the target.

The goals of either approach are similar: drive down longer-term interest rates to encourage new spending and investment by households and businesses…

Some officials think capping yields could deliver the same amount of stimulus while acquiring fewer securities than they did through their bond-buying programs from 2012 until 2014, when the Fed purchased more than $1.6 trillion in Treasury and mortgage securities.

Do you understand it now? Below you will find our email address. Please contact us at your earliest convenience. For we do not understand it.

Breaking the Invisible Hand of Capitalism

Yet of this we are certain:

Capping Treasury yields — whatever it is — represents a further warfare upon the free and open market, further violence against transparency and honesty.

It seizes Adam Smith’s invisible hand of capitalism… and snaps another finger in two. Few remain as is.

What is it then but a gloved admission — that all previous central bank offensives have failed in their aims?

That is, a concession that they have failed to yield a healthy, prosperous and sustainable economy.

Ten years of them and victory remains as elusive as ever before.

But this much we will say for the chairman:

He is finally honest about it…