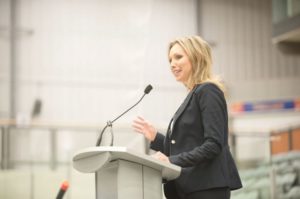 Kirsten Marcia is the founder of DEEP and its President and CEO.

The FEDs announced Friday support for a new geothermal energy power facility that is being led by DEEP Earth Energy Production Corp. (DEEP).

The energy project is the first of its kind in Canada as its taps into a new energy resource and is located near Estevan in southeastern Saskatchewan.

Geothermal energy harnesses heat from the earth’s crust and transforms it into electricity that can be used to power homes and businesses year round.

The government of Canada will provide $25.6 million in funding for the five Megawatt facility, which is designed to produce enough energy to power approximately 5,000 homes, while taking the equivalent of the yearly emissions of 7,400 cars out of the atmosphere.

The project will create 100 jobs during the construction phase, and provide the provincial power grid with clean, renewable energy, creating new business opportunities for local communities, DEEP said in a press release.

In an announcement, Trudeau states “DEEP’s project has the potential to transform how the province and the country produces energy, while creating good, middle class jobs for Canadians,” he said.

The total cost of the project is $51.3 million.

In a news release on January 11, 2019, DEEP announced the successful drilling of its first geothermal test well. The vertical well, managed by Frontier Project Solutions and drilled by Horizon Drilling, reached its target depth of 3,530 metres on December 16, 2018.  This is the deepest well ever drilled in Saskatchewan’s history, the company said.

“This is a major step forward for the first renewable energy project of its kind in Canada,” said Kirsten Marcia, President and CEO of DEEP.  “Successfully drilling and validating the resource potential is the biggest achievement this project has seen to date,” she said.

DEEP has said it will harness high-quality geothermal resources with existing drilling and power generation technologies to establish a long-term renewable baseload (24 hours a day, 365 days a year) power supply.

Marcia said DEEP is drilling into a hot aquifer, one that is hot enough to generate power. The company plans to harvest the heat from the water and convert it to clean base load power, using conventional drilling and power technology.

As a result, it is essentially mining heat to produce sustainable, renewable power, Marcia said.

The company’s long term goal is to develop hundreds of megawatts of baseload power facilities from small, scalable and repeatable 5-20 megawatt power plants, each of which could power up to 5,000 households.