This post Brace Yourselves: A Crash Is Coming appeared first on Daily Reckoning.

I know we are in the midst of a joyous time of year, but that doesn’t mean the world has stopped turning. And the start of 2019 brings us to a critical moment. We’re on the brink of the third wave crash.

Let’s take a gander at recent history: First, there was the 1980’s savings and loan crisis. Then, in 1987, the stock market crashed, and the Dow Jones index lost 23% of its value. The next major event was the dotcom bubble and subsequent crash from 1999 to 2000. And the most recent event was the global financial crisis in 2007-08, which was triggered by the subprime mortgage crisis and collapse of the U.S. housing bubble. I’m leaving out a few smaller ones in between, but those are the true highlights (or lowlights, really) of the crash cycle in the past forty years.

Essentially, the economic cycle is longest period of tranquility took place during the 1990s when the economy went an entire decade without a down cycle. That was a rare—and glorious—decade.

As you can see, it’s been 10 years since the last major event—if history repeats itself, we’re due for a crash. And soon. That is if we’re not already seeing the needle headed toward the bubble.

Let’s examine the evidence: Both the Dow Jones Industrial Average and the S&P 500 are up for their worst December performance since 1931, when stocks were battered during the Great Depression.

December is typically a very positive month for markets. The Dow has only fallen during 25 Decembers going back to 1931.

The S&P 500 averages a 1.6 percent gain for December, making it typically the best month for the market, according to the Stock Trader’s Almanac.

Bitcoin, the highly volatile cryptocurrency, has created a complete frenzy in recent weeks. Last year at this time, Bitcoin saw a 1600% increase in value. That being said, Bitcoin’s bubble literally popped and millennials, like generations before them, just got a painful lesson about speculation. Also, in the news there’s talk of housing bubbles and auto loan bubbles forming left and right.

Do you know what bubbles always do? Pop!

Preparing for The Pop

I’m not trying to end the year on a note of doom and gloom. We don’t know when this bubble will burst, but we can certainly start preparing for it. How? It all comes down to financial education.

Central to the difference between those with low and high financial IQs is a simple but profound literacy: the ability to understand a financial statement—an income statement and balance sheet. 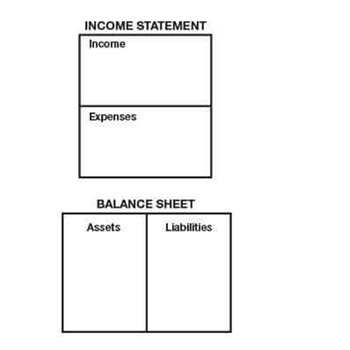 Strangely, accounting classes teach how to read an income statement and balance sheet separately. But, it’s actually the understanding of the relationship between them that’s crucial. After all, how can you tell what an asset or liability really is without the income column or the expense column? Understanding the relationship between the two allows you to easily see the direction of your cash flow so you can effortlessly determine if something is making you money or not.

Bottom line: If something is making money, it’s an asset. If not, it’s a liability. The reason most people with low financial IQs suffer money-wise is that they purchase liabilities and mistakenly list them under the asset column.

Cash Flow is the Only Way to Go

It’s this simple insight that explains why those with a low financial IQ are still poor even when they make a six-figure income. They have no clue how to move their money into assets that make them more money. And cash flow is king.

Because financial subjects have a way of turning unnecessarily complicated, let’s keep the concepts simple and use diagrams for added clarity. If you can understand the following diagrams, you have a better chance of acquiring great wealth. 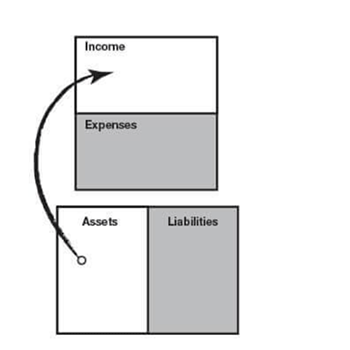 An asset is something that puts money in your pocket. This is the cash-flow pattern of an asset:

A liability is something that takes money out of your pocket. This is the cash-flow pattern of a liability: 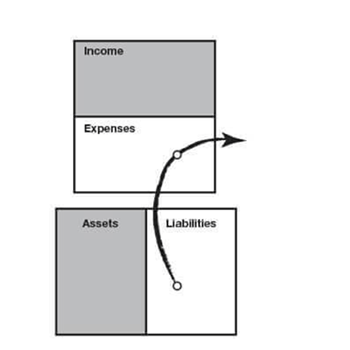 Now, confusion can happen because accepted methods of accounting allow for the listing of both assets and liabilities under the asset column.

To explain this, look at this diagram:

In this diagram, we have a $100,000 house where someone has put $20,000 cash down and now has an $80,000 mortgage. Confusing indeed! How do you know if this house is an asset or a liability? Is the house an asset just because it is listed under the asset column?

The answer is, of course, no. In order to know for sure, you would need to refer to the income statement to see if it was an asset or a liability.

To illustrate this, let’s look at a diagram that depicts the house as a liability: 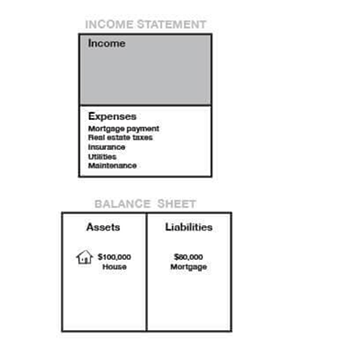 You can tell it is a liability because it’s only line items are under the expense column. Nothing is in the income column.

Next, let’s look at a diagram with the addition of a line that reads “rental income” and “net rental income”—the key word being “net.” Do you see how that addition to the financial statement changes that house from a liability to an asset? 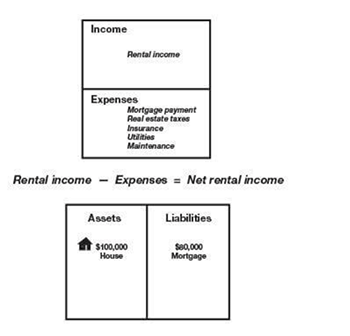 Did you find this lesson profound? It’s essentially the basis for building all great wealth. Going back to my earlier comment, a person with a high financial IQ and $100,000 would be able to know how to invest it in assets that are true assets—ones that put more money back in the pocket each month. The person with the low financial IQ would spend that same money on liabilities but wouldn’t be able to diagnose what was wrong. Instead, they would try and work harder to make more money—a vicious cycle we call the Rat Race.

Back to The Bubble

Understanding the relationship between the income statement and the balance sheet allows you to quickly understand if an investment is an asset or a liability—and this understanding will allow you to make the right investment every time. While you can’t control how the economy behaves or when this unavoidable bubble will occur, you can absolutely control your ongoing education and financial prowess to minimize its impact.

The post Brace Yourselves: A Crash Is Coming appeared first on Daily Reckoning.